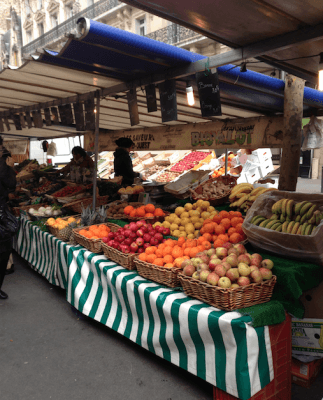 Food markets are very popular and part of the weekly life of French people.  Paris has a decent number of them (over eighty) on weekdays and weekends.  Stall owners know their product very well and are a great source of information.

You can find three types of markets in Paris:.

The “marchés volants” are our favorite markets.  Note that they are not all farmers markets as a lot of merchants buy their product at the huge market outside of Paris called Rungis, one of the world's largest wholesale market for fresh products.  If you want to buy local products look for the sign that says "Direct du Producteur".

This street is in the heart of les Halles, who was nicknamed “the belly of Paris” as it provided all of the fresh food produce for Parisians.  Start at Eglise Saint Eustache and check the Patisserie Stroher (oldest pastry shop in Paris established in 1730).  Our recommendations: Le Comptoir de la Gastronomie (established in 1894, epicerie and restaurant), for cookware: E Dehillerin  (nearly 200 years old), Mora and La Bovida; If you love to bake:  GDetou.

This small market is the oldest market in Paris dating back from the 16th century.  It takes its name from the 16th century orphanage that used to occupy this site.  The orphanage closed before the revolution and the market reopened in 2000 as a deluxe food market.  There you will a couple small restaurants: North African, Japanese, British, Italian and French cuisine

Our favorite food stalls are the Japanese with its bentos and Alain the boulanger with his crepes, socca, and sandwiches.

Marché Maubert   Place Maubert     Tuesday, Thursday, and Sunday from 8:30am to 1pm

This market was first opened in the 1920s.  In the 19th century, there was a "marché aux megots" (discarded cigarette end market) where beggars who would walk around the city collecting discarded cigarettes to resell them to cigarette manufacturers.  Nowadays, it is a small market with about forty merchants set in a square. Around that market, don't miss: Aux Merveilleux de Fred (specialized in meringues), Eric Kayser (bakery), Laurent Dubois (famous cheese store), La Pirée (Greek products), Brulerie Maubert (coffee roaster).

Start at the beginning of the rue Mouffetard, near the church of Saint Médard. Stop at the Greek Mavrommatis or the cheesemaker Androuet

This is a market we regularly go to. It is an organic market on Sunday.  Created in 1989, it was the first organic market in Paris.  Among our favorite stalls: nuts and dried fruits, English muffin and pastry, paella made on the premises with excellent galettes.  On Sunday, the best is to go early morning as it gets pretty packed around 11am.  This sunday market is quite expensive compared to others, but it is nevertheless a pleasure for the eyes.

This market is currently undergoing some renovations.  There you will find a couple of stalls with a good Greek and cheese stall and a really nice florist. In this 19th century building, new stores have also taken place such as Uniqlo and Apple.  Among restaurants you will find: L’avant comptoir du marché (famous chef Yves Camdeborde, tapas), L’Etable (famous butcher Hugo Desnoyer), Marcello (Italian with a cute terrace)

This market is close to the Eiffel tower and the Invalides and is one of the largest markets in Paris with about 80 merchants.

One of our favorite in Paris.  It is a good option if you are visiting the Eiffel Tour.  Amongst the reputable vendors: Davoli (Italian delicatessen since 1962) Jeusselin (Charcuterie/delicatessen one of the few that prepare almost everything they sell on site) Cantin (cheese store who ages their cheese in their own cellar) Epicerie Rive Gauche (gourmet grocer sourcing their product very carefully), Martine Lambert (for her sorbet and ice cream), Moulin de la Vierge (pastry shop)

This small market is organic and features more or less the same vendors (about 35) as the Raspail Sunday organic market.

At the bottom of Montmartre, small (with about 20 merchants), but unique in that it is open in the afternoon.

One of the city's largest markets with about 120 vendors, it stretches from the Place de la Bastille to the Canal St Martin.  The best day to go is Sunday as it is where you will find the most vendors, but note that since it is during the weekend, the best is to go early.

Created in 1618, Aligre is a unique lively market in Paris as it combines three markets into one: an open air market with mainly fruits and vegetables, a covered market (inaugurated in 1781), and an antique market with low to middle end items.

Stop at one of the best pastry shop Blé Sucré to get a croissant. Have lunch at Le Charolais or wine at le Baron Rouge. Buy spices or olives at Sabah. Buy tapenade at the épicerie Sur Les Quais. Check the cheesestore: Hardouin

Dupleix Grenelle    Boulevard de Grenelle, between rue Lourmel and rue du Commerce    Wednesday and Sunday from 9am to 1pm

One of the largest in Paris, it has over one hundred forty merchants. The best day to go is on Sunday as you will have more merchants.  It is also a good option to go on a rainy day as it is slightly covered by the elevated metro line.

Present since 1873, it has about one hundred and twenty merchants and has the best selection of fish and shellfish.  The famous vegetable grower Joel Thiebaut is present on this market and is a favorite of Michelin star chefs.  Check Maison Priolet that sells game and high quality poultry.  You also have a lot of take away options: Thai, Lebanese, Crepes, Chinese, Paella, Boeuf bourguignon, and choucroute among others.

Head to the Palais de Tokyo after for some cultural experience.