Dries Van Noten "Inspirations" Musée des Arts Décoratifs Whether you are into women's fashion or men's fashion, it is hard not to have a "crush" or soft spot for the designer Dries Van Noten. The musée des Arts Decoratifs is offering explicit insight into his creative process with a new exhibition called "Inspirations" curated by the excellent Mrs Goblin (the museum chief curator of modern and contemporary fashion and textiles).  The first ever dedicated to the designer.  The show opened during fashion week just three days after Dries Van Noten floral-filled Fall 2014 woman collection presentation and everyone was raving about it! 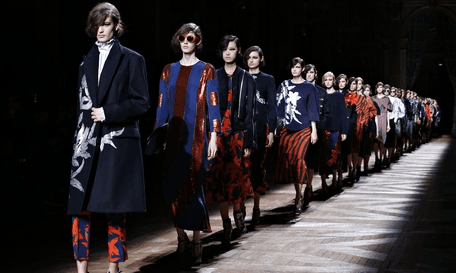 Francois Guillot/AFP/Getty Images Mr. Van Noten, 55, has been designing his namesake label since 1986, giving him for this expo 28 years of collections to draw upon!  But don't call it a retrospective, in Van Noten's words: "I think I'm too young and too busy to do a retrospective, it's really about my inspiration, how I work. I hope that most people go for the relation between the clothes and the works of art." 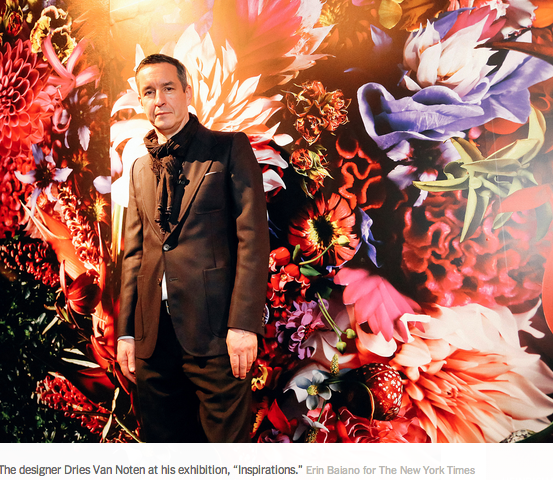 The two-floor exhibition offers an impressive view into his creative process via inclusion of other paintings, textiles, videos, and photographs.  You will find artworks by Damien Hirst, Michaël Borremans, Victor Vasarely, Gerhard Richter, Jacques Emile Blanche, Yves Klein, Bronzino, and Picasso.  But also garments by designers who have influenced him, including Schiaparelli, Dior, Kansai Yamamoto and Thierry Mugler.  Film stills are also on display such as Stanley Kubrick's Clockwork Orange, Jane Campion's The Piano, Luchino Visconti's Death in Venice.  About half of the 400-plus pieces on display were borrowed from other museums and private collections. 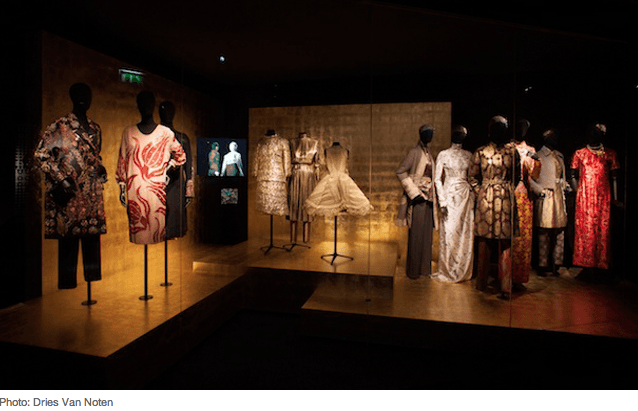 In the entrance, the walls and ceiling spell out Van Noten’s references from Disco to Lou Reed, Sister Sledge, E.T., Desperately Seeking Susan and much more....  The exhibition is grouped into annotated themes: butterflies, uniforms, marble, Bollywood, the foppish, punk, Francis Bacon, oriental, feathers, flowers and gold . Throughout are videos from runway shows, from the early days to the present. The Paris exhibition, which runs through Aug. 31 will move to Antwerp, Belgium.  It has been a real success with higher than average daily visitors for the museum.  We highly recommend it! Dries Van Noten "Inspirations" From March 1st to August 31st Musée des Arts Décoratifs 107 rue de Rivoli 75001 Paris Tuesdays to Sundays from 11am to 6 pm Until 9pm on Thursdays Closed on Mondays http://www.lesartsdecoratifs.fr/