Perfume, its history and iconic scents, has been the subject of exhibitions over the past year in Paris, with Chanel n°5 at the Palais de Tokyo last spring and Miss Dior at the Grand Palais in November. The Guerlain perfume house is celebrating the 160th anniversary of the bee perfume bottle ("flacon Abeilles") with an exhibition in its newly revamped boutique on avenue des Champs Elysées.  If you are walking along the Champs Elysées, do not hesitate to step inside. It is a perfect opportunity to rediscover iconic perfumes such as Shalimar, or even get a beautiful bottle of perfume as a christmas gift. 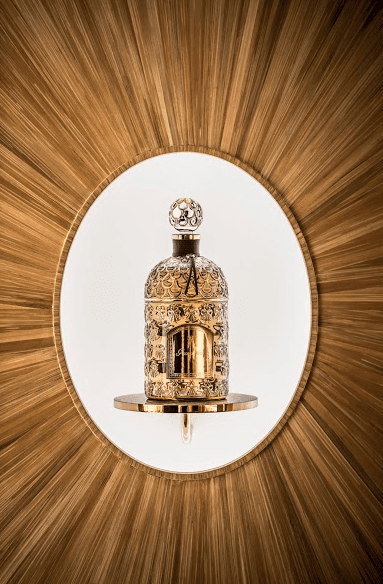 THE EXHIBITION To celebrate 160 years of their iconic honeycomb perfume bottle, Guerlain has invited nine leading artisans, including gilders, feather workers and leather craftsmen, to reinterpret the fragrance’s signature design. Before the pieces are sold to raise money for the Institut National des Métiers d’art (France’s national Institute of leading artisans), the works are shown in a special exhibition at the Guerlain store at 68 Champs Elysées. A LITTLE HISTORY One hundred and sixty years ago (1853), mesmerized by the beauty of the young empress Eugènie, Pierre-François-Pascal Guerlain created the perfume "Eau de Cologne Impériale".  For the perfume to be as prestigious as its aristocratic owner, Guerlain asked the "Verrerie Pochet et du Courval" to create a unique bottle, which was decorated with a myriad of bees, hand-gilded with fine gold. The bee bottle’s shape was inspired by the top of the Napoleon I column in the Place Vendôme in Paris, which was located right next to the first Guerlain store. The Bumble Bee bottle itself is an ode to the royal family’s coat of arms. The bee symbolizes immortality and resurrection. The young empress wore that perfume exclusively for a couple of years and P.F.P. Guerlain became the official Perfumer of its majesty. 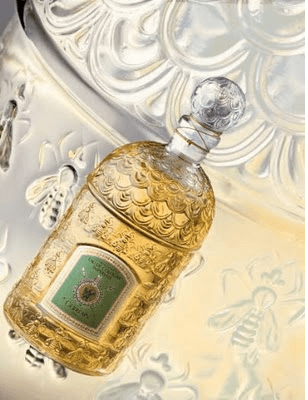 Legend says that the Empress used the perfume to ease her migrains. Very light, this eau imperiale can be worn under another fragrance. It is not designed to last, but to refresh the body and revive the spirits, and then fade away. The success of the perfume house peaked and Guerlain went on to create perfumes for Queen Victoria of the United Kingdom and Queen Isabella II of Spain, among other royalty.  The notoriety and the prestige of the perfume house has not changed since then. GUERLAIN 68, avenue des Champs Elysées Located on the Champs Elysées since 1913, the Guerlain store has just reopened its doors after major renovations. The well known architect and designer Peter Marino has set his eyes on this prestigious heritage, in order to offer the most luxurious Guerlain expression of its brand. 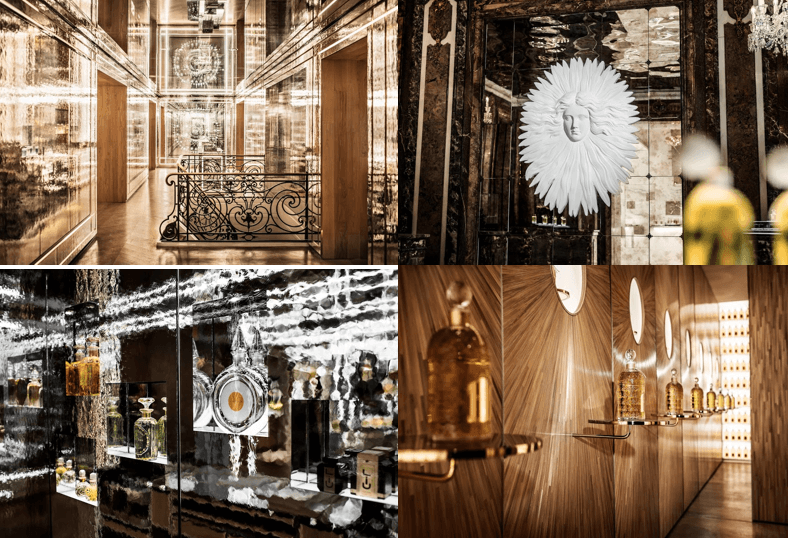 On the first floor, the kingdom of perfume with iconic bottles and perfumes. You can have a perfume bottle customized to your liking. On the second floor, the Guerlain Spa Institute kept its original look imagined by french interior designer Jean Michel Frank in 1939. Immerse yourself in a world of well-being and beauty. We highly recommend the spa.

Guerlain also opened a restaurant called "Le 68 Guy Martin ". The restaurant was born of the encounter between two talents Thierry Wasser, Guerlain Perfumer since 2008, and Guy Martin, Michelin-starred at Grand Véfour. It is opened for breakfast, lunch, and dinner.

Maison Guerlain 68, avenue des Champs-Elysées 75008 Paris The exhibition is on from December 10th to February 14th 2014 all photos ©guerlain