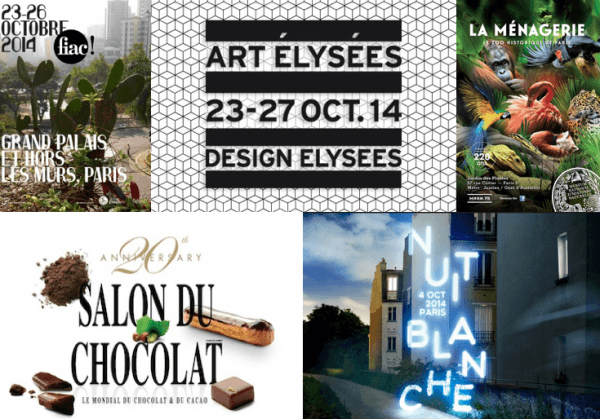 Discover what is happening in Paris this month!

October 4th to 5th La Nuit Blanche The Nuit Blanche festival is Paris’ annual night-long celebration of art, music, and light,  starting at sundown on Saturday, until sunrise on Sunday.  Each arrondissement offers its own attractions, from light art installations to public performances. with a diverse set of events scheduled throughout the city's neighborhoods. 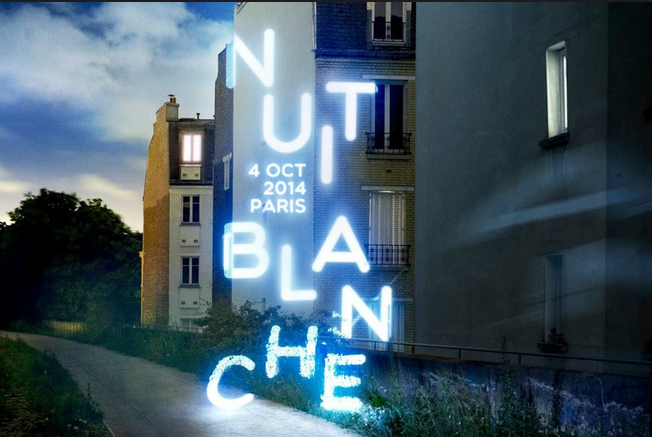 Check out time out feature on what to see here October 8th to 12th Fetes de Vendange de Montmartre  From October 8th to 12th, the annual Fête des Vendanges Montmartre (the Montmartre grape harvest festival), returns for the 81st time celebrating the work of French poet Jacques Prévert. In addition to the harvest, Bal des Vendanges, and food and wine village, this year will bring a slam poetry reading, a writing atelier, a special opening of the apartments of poets Boris Vian and Jacques Prévert. The vineyard is located on rue des Saules.

http://www.fetedesvendangesdemontmartre.com/ October 12th 20Km Marathon of Paris It is the 36th edition of the 20 kilometers Marathon of Paris.  28,000 runners will start up from the Pont d'Iena, right across the Eiffel Tower.

Jeu de Paume 1 place de la Concorde, 75008 Paris Tuesday: 11am – 9pm Wednesday – Sunday 7pm Closed Mondays http://www.jeudepaume.org October 23rd to 26th FIAC Foire Internationale d'Art Contemporain The FIAC, the contemporary art fair,  has solidified its position in the art world in recent years, bringing together a high-profile mix of contemporary art collectors, museum curators and international dealers, and winning international recognition through a rigorous selection process. This year’s fair, which runs from Thursday to Sunday at the Grand Palais and other venues in the capital, features 191 exhibitors, 3440 artists in its main venue, the Grand Palais. The FIAC also has an outdoor programming called “Hors les Murs” (Beyond the Walls) to make the fair accessible to a wider audience. That program, which was started in 2006, includes performances, solo shows, conferences and films made by established or emerging artists.  The Tuileries Gardens, the Place Vendôme, the Jardin des Plantes and the Seine river banks — are being turned into exhibition spaces.  Students from the Ecole du Louvre will be in the Tuileries Gardens to answer questions about the art pieces every day from 3pm to 5:30pm. This year, the FIAC has also added the Cité de la mode et du Design as a venue to show its satelittle fair called (off)icielle who will showacse 60 young galleries The 41st edition of the FIAC will also be the opportunity to inaugurate new major institutions like the Louis Vuitton Foundation, which was designed by Franck Gery in the heart of the Bois de Boulogne. The inauguration is set for October 27th.  The Monnaie de Paris will also reopen on October 23rd with an exhibition on Paul McCarthy and the Picasso Museum in the Marais will finally reopen its doors on October 25th after being closed for more than five years. 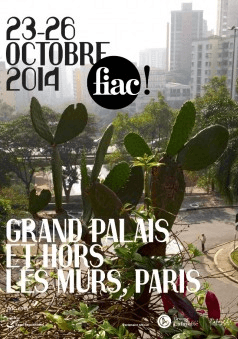 From 11am to 8pm, until 6pm on the 27th Avenue des Champs Elysées from Place de la Concorde to the Grand Palais http://www.artelysees.fr/ October 29th to November 2nd Salon du Chocolat The city's largest fair dedicated to chocolate in all of its forms, from bean to bar. It takes place at the Porte de Versailles - Paris Expo, tickets  are €14. To avoid lines, you can purchase tickets in advance online .  It is the 20th anniversary of this fair. 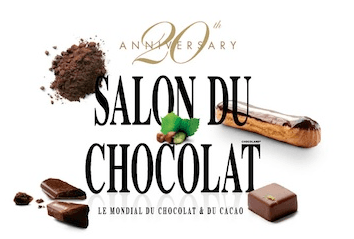 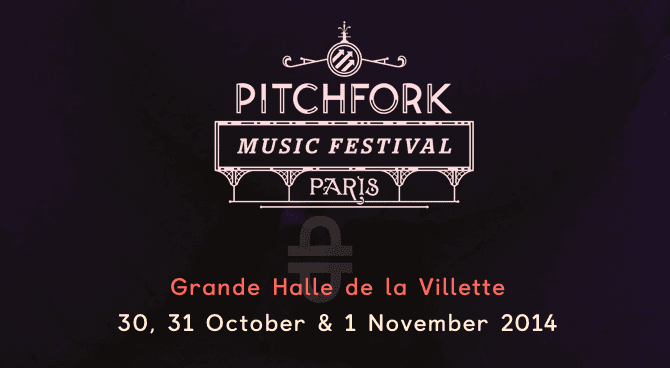 http://pitchforkmusicfestival.fr/ Until November 2 French fashion in the fifties at the Musée Galliera In the 1950s haute couture and ready-to-wear were one of France's major economic sectors and a veritable fashion breeding ground. This was haute couture's golden age, when Paris regained its title of world fashion capital. Basques, petticoats, corolla skirts, pointed shoes, bright-coloured floral and striped prints, wasp-waist suits with straight skirts, strapless sheath dresses, cocktail dresses, rock crystal embroidery: such was the couture of the fifties. At the same time, though, a more relaxed style – close-fitting pullovers, pedal pushers, jeans – was being adopted by the baby boom generation. Drawn from the Palais Galliera collection and sporting the labels of the most famous couturiers as well as others now forgotten (Jean Dessès, Madeleine Vramant, Lola Prusac), the remarkable pieces making up this exhibition – some 100 models and accessories – retrace the evolution of the female form through the decade 1947–1957: from the birth of the New Look to the death of Christian Dior and the advent of Yves Saint Laurent. 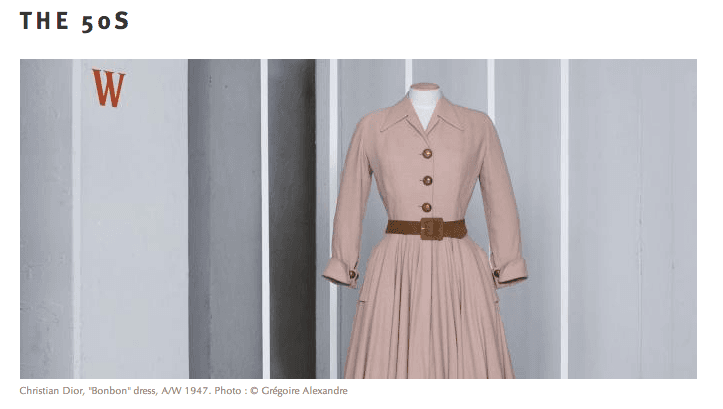 Palais Galliera, 10 avenue Pierre Ier de Serbie, 75116 Paris Open from Tuesday to Sunday, from 10 am to 6pm Late openings on Thursdays until 9 pm http://www.palaisgalliera.paris.fr/ Until November 2nd Dries Van Noten at the Musée des Arts décoratifs You only have a couple of weeks left to see this great expo that we have mentioned on an earlier post. The work of the Belgian fashion designer, Dries Van Noten, is featured at the Musée des Arts décoratifs in Paris. This is the very first exhibition devoted to the artist’s work. As Dries Van Noten takes us on an intimate journey into his artistic universe, he reveals the singularity of his creative process which he illustrates with his various and numerous sources of inspiration. This event is an eye opening experience, where Dries Van Noten’s men’s and women’s collections are put together with iconic pieces from the museum’s fashion and textile collection. The show also includes photographs and videos, film clips, musical references, as well as artworks by renowned artists, from public and private collections, that have triggered the designer’s imagination throughout his life and career.

Les Arts Décoratifs, 107 rue de Rivoli, 75001 Paris Open from Tuesday to Sunday, from 11 am to 6 pm Late openings on Thursdays until 9 pm http://www.lesartsdecoratifs.fr/english-439/ Until November 2nd Lee Ufan at Versailles The Palace of Versailles welcomes the Korean artist Lee Ufan for a major contemporary art exhibition in the gardens. "The intense and silent works of this artist will be placed in the palace and in the gardens, at the foot of the Gabriel stairs, in the great perspective designed by Le Nôtre and around the corner of walks or in the mysterious groves, completing and modifying the atmosphere for a time. In Versailles, the artist will install ten works, all entirely new, some of them of unusual size to correspond to the spaces in the gardens. Behind their very restricted formal vocabulary, true diversity will emerge; some configurations will be completely new to his work. This exhibition will create a major landmark in Lee Ufan’s sculptural work with its confrontation to the exceptional site." 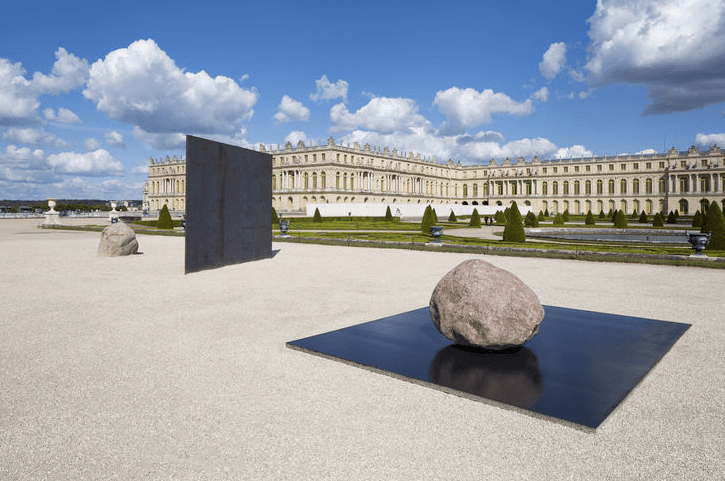 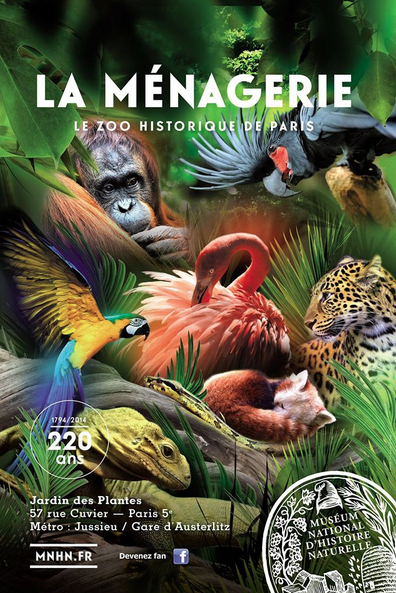 La Ménagerie, 47 Rue Cuvier, 75005 Paris Open from Wednesday to Monday, from 10 am to 5 pm http://www.mnhn.fr Until January 5th Marcel Duchamp : La Peinture, même » at the Centre Georges Pompidou Much has been said about Marcel Duchamp's break with painting, putting forward, as a red herring, the original psychological trauma caused by his Cubist friends' and brothers' rejection of his Nu descendant un escalier for the 1911 Salon des Indépendants. In the light of various iconoclastic, Dadaist gestures and his invention of the ready-made, the creator of Fountain (the "Fountain/urinal") is generally perceived as the artist who killed painting. And yet the debate remains open: was not Duchamp's intention to reformulate it, rather? The Centre Pompidou exhibition now proposes a new interpretation of the paintings of one of the most iconic figures in 20th century art. 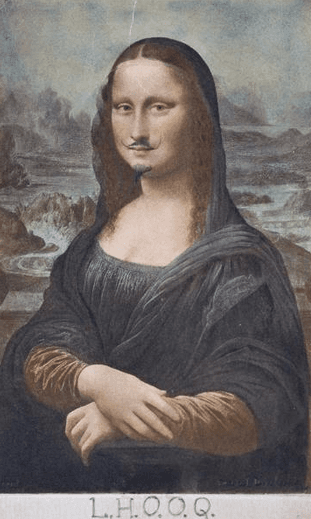 Centre Georges Pompidou, Place Georges Pompidou, 75004 Paris Open from Wednesday to Monday, from 11 am to 10 pm http://www.centrepompidou.fr/ Until January 11th China at the Musée des Arts décoratifs For the first time, this exhibition is revealing the exceptional quality and scope of Les Arts décoratifs’ collection of Chinese objets d’art. This remarkable ensemble reflects the fascination for Chinese art in France, principally in the second half of the 19th century and the first half of the 20th century. The interest of these donors in the art of China, and more broadly the Far and Near East, often stemmed from their fascination for certain techniques and materials, and for their forms and decorative motifs. The pieces on display reveal exquisite skills and plunge us into the fascinating, intriguing universe that revitalised the French ornamental vocabulary, from the first World’s Fairs until very recent times. Today, our knowledge of Chinese culture enables us to regard these objects in a different light, that of their meanings and uses, and to more fully understand the interest that the Chinese themselves have shown in them down the centuries. It is these dual points of view that we have tried to bring together in this exhibition which is organised within the context of France Chine 50 - www.france-chine50.com 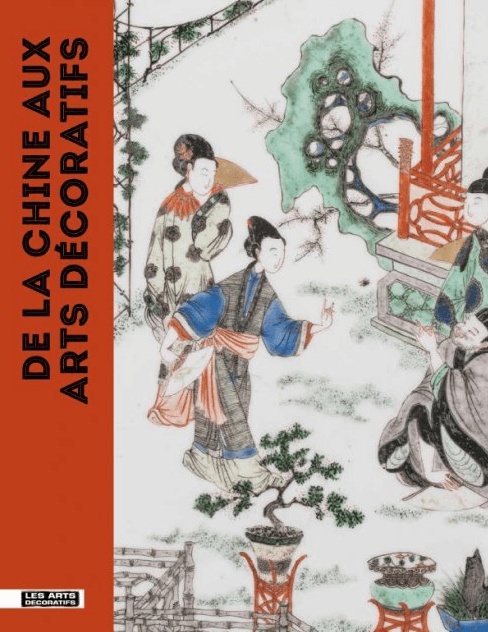 Les Arts Décoratifs, 107 rue de Rivoli, 75001 Paris Open from Tuesday to Sunday, from 11 am to 6 pm Late openings on Thursdays until 9 pm http://www.lesartsdecoratifs.fr/english-439/ Until January 18th Impression, soleil levant at Musée Marmottan Monet To celebrate the 80th anniversary of the museum and the 140th anniversary of the first « Impressionism, soleil levant » exhibition, the Musée Marmottan Monet organises the first exhibition ever dedicated to the founding painting of Impressionism.

What does the painting really represent? The sunrise or the sunet? When was it panted? In 1872 or in 1873? What happened to the painting after the first Impressionism exhibition? The exhibition answers all these questions and many more.

Musée Marmottan Monet, 2 rue Louis Boilly, 75016 Paris Open from Tuesday to Sunday, from 10 am to 6 pm Late openings on Thursdays until 9 pm http://www.marmottan.fr/