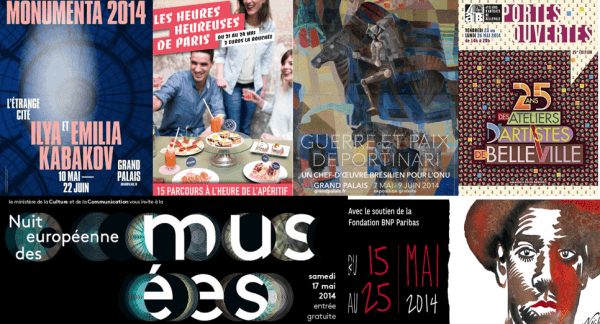 What is happening in May in Paris

Monumenta at the Grand Palais from May 10th to June 22nd For the event’s sixth edition, Russian-born artists Ilya and Emilia Kabakov, celebrated internationally for their large-scale projects and ambitious installations, will invite viewers to lose themselves in the maze of an imaginary town: “The Strange City”. Grand Palais Mondays, Wednesdays and Sundays from 10am to 7pm Thursdays, Fridays and Saturdays from 10am to Midnight Closed every Tuedays See more on the Grand Palais website War and Peace by Portinari at the Grand Palais from May 7th to June 9th The Grand Palais pays homage to Candido Portinari,one of the greatest Brazilian painters of the 20th century, and his masterpiece: War and Peace. The painting was commissioned by the Brazilian government, who then offered it to the United Nations in 1957. Produced between 1952 and 1956, the panels are about 14 meters high x 10 meters wide. They will be returned to the UN in the spring of 2014. Grand Palais From 10am to 8pm Every day except Tuesdays Jazz festival of Saint Germain from May 15th to May 25th  "Spring is a delightful season in Paris, especially in Saint-Germain-des-Prés where this quartier is the envy of the whole world, as well as an inexhaustible source of inspiration for the soirées and events which the Festival dreams up every year for visitors. What kind of music shall we have to carry you away at the church in Saint-Germain? How can we illuminate the majesty of Saint-Sulpice this year? Which pianist has the depth and audacity it takes to “jazz up” the Sorbonne? Who are the talents of tomorrow you won’t be able to forget? Which international stars can you get close to, in the most unlikely places? And which women in jazz have the words and rhythms to bring Saint-Germain-des-Prés to its feet and dance?" Get the answers to all those questions at the festival! http://www.festivaljazzsaintgermainparis.com Nuit Européenne des musées May 17th 10th anniversary On the night of May 17th, most museums will be open thru the night with special events. A night not to be missed! http://www.nuitdesmusees.culture.fr/ D'Days May 19th to 25th D’DAYS is an annual design festival, which, over a one-week period, takes over public spaces and emblematic cultural and economic sites around the capital. Every year, a key theme is chosen to guide the participants’ creations, thus enabling all of the festival to be read through a coherent prism. This year's theme is movement. From May 19th to 25th Tuesday thru Saturday 12am-8pm, Sunday = 12am-7pm http://www.ddays.net/en/ Les Heures Heureuses de Paris May 21st to 24th A culinary happy hour! For three nights at over 200 locations, the usual boring bar snacks are replaced by small plates for just 2 euros. On the 24th of May from 11am to 11pm, the Docks - Cité de la Mode et du Design (13e) will host all of the parisian street food on their rooftop. More info on their facebook page Roland Garros From May 25th to June 8th Our favorite tennis tournament starts on May 25th http://www.rolandgarros.com Les Portes Ouvertes de Belleville May 23rd to 26th 25th anniversary More than 120 artist ateliers, located in the Belleville neighborhood, will open to the public. From 2pm to 8pm http://ateliers-artistes-belleville.fr/en/les-portes-ouvertes/edition/ Ballet at the Opera de Paris Orphée et Eurydice by Christoph W Gluck Dance Opera by Pina Bausch Opera Garnier Orphée et Eurydice is one of Pina Bausch’s major works. The choreographer brings flesh and blood to Gluck’s score We went to see it and we absolutely loved it 12, 13, 15, 16, 17, 19, 20, 21 of May more info here Balanchine / Millepied Opera Bastille This encounter between two great French composers and two choreographers from the New York City Ballet, its founder George Balanchine and former student Benjamin Millepied, highlights the similarities and dissonances between them. 10, 14, 15,18, 21, 25, 26, 28, 29, 31 of May more info here